I made about 68 miles today, to Chickahominy Reservoir in Riley, Oregon, though I will have to backtrack seven miles tomorrow for the next leg.

It was a quiet night on the high desert, with only cricket sounds until the dawn birds sang. Wild horses visited me at breakfast.

The day got off to a good start, with a long downhill from Stinkwater Pass, and the vast plain ahead promising little climbing for the morning. I met a couple on an eastbound trans America bike tour, pushing their bikes up to the top of the pass. He thought the sporting goods store in Burns would be big enough to carry bicycle tires and tubes. I ran into Dave and Naomi again at the rest area at the bottom of the hill, and filled my water bottles from their tank again, saving a stop at the gas station down the road. All was well as I cruised down the flat valley. Even the tire that was losing air every three miles yesterday seemed to be holding pressure for fifteen miles.

Just outside of Burns, I had to pump up the front tire again. When I tried to cinch down the valve really tight, the valve rod broke off. The stem was too short for the rims, and too much pumping with a hand pump jammed tight had worn the metal. Even without the nut, the tire held air, so I hurried off to find the sporting goods store three miles away on the other side of town. But I was hitting my rims after two miles, and had to stop. I could walk the bike the mile. But maybe I should call first. B&B Sports did not sell bicycle accessories, as it turned out, but the Big R or the Rite Aid would have tubes and patch kits, I was assured. They were across the street from where I stopped.

The Big R did have tubes, but not the right size or valve type. So I bought a patch kit -25 more patches if needed. The Rite Aid also did not have the right sized tubes. So I bought another patch kit and a spare pump, since I had begun to worry about how sunk I would be if I lost or broke my one pump. I could now fix about 50 flats, if needed, but I could not fix a broken valve stem. The one that broke had only been on the bike for two days. That worried me, since I was down to one spare tube – and that one with a short valve stem.

So I put my twice patched, long stemmed tube on the front wheel, then went grocery shopping while I was there, then went to Boomers Place restaurant in neighboring Hines, OR, for beer and an early lunch and possible solutions with a WiFi connection. I made reservations for tomorrow night at the Christmas Valley Desert Inn. Then I went to Amazon, and tried to buy new tires and tubes for overnight shipment to the motel. At first, it seemed an option, then the overnight option disappeared. I googled “Bicycle Tires Overnight Shipping,” which led me to a seller in Portland, Oregon, which claimed that UPS standard shipping would deliver two new tires and two new tubes in Christmas Valley tomorrow. I figured it was worth a try.

After lunch, I headed west for Riley and the BLM campground at the Chickahominy Reservoir. The road climbed again to a pass of sorts, more flat high desert dotted with pines but smothered with sagebrush. One thing about bike touring – you are very sensitive to the different smells of different places. The sage range in Oregon smells different from sage in Idaho or Wyoming or Nebraska – I would say it has a hint of chocolate to it. 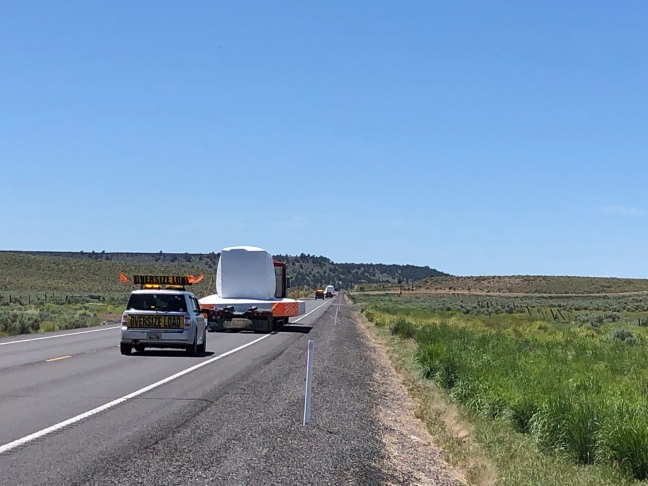 Several times today I was passed by frightening wide load trucks. The first time, the lead vehicle honked at me and I looked behind to see this shoulder-sweeping behemoth coming up to me. After that, I pulled over for every wide load lead vehicle not take any chances.

I got to Riley, and its only little store, at around four, and used their outlet to charge my phone while I drank a beer. Dave rode in, fully loaded up, since Naomi had headed back to Portland with the van. He was going to camp at Chickahominy, also, and had confirmed at the BLM office that water was available at the campground.

It was still another seven miles of riding, but a very pleasant place on the reservoir and nice to have company for the evening. Dave is also a sailor, so we shared sailing stories over dinner and the box of Cabernet I bought back in Burns

One thought on “Leg 41 – Flat Rolling, and More Flats, to Riley”