Today’s goal was Williamsport, MD to connect with the C&O Canal towpath trail along the Potomac. Google gave us three suggested routes – through Biglerville where Danielle’s parents live, through Gettysburg, or down the valley through Mechanicsburg, Shippensburg, and Chambersburg. I originally thought we’d go through Biglerville and drop in on Danielle’s parents, but it turns out that her father was away at a sailing regatta and their house is several miles and a long steep hill out of the way. So we settled on the flattest route for my longest day yet – 83 miles. 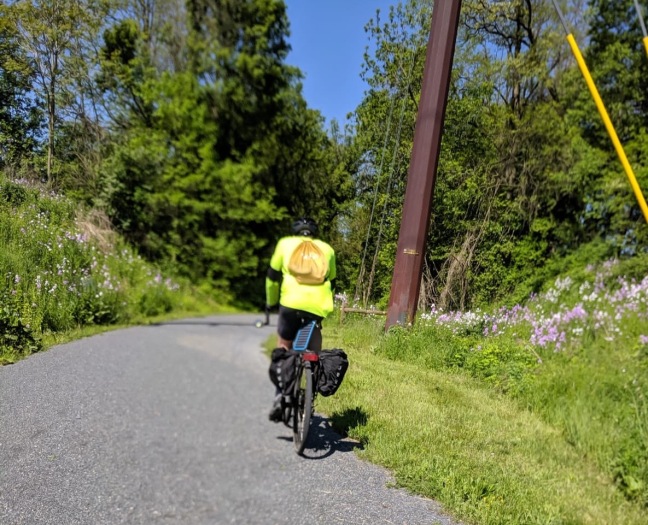 Until now, I have been travelling light, since I was staying at BNBs and houses. Since Robin was driving out to Harrisburg to join me as far as Pittsburgh (and to drop the dog off), I let her bring my camping gear. Justin is also join8ng us to Pittsburgh. So we did a Father-Son ride 54 miles to Chambersburg, mostly flat riding with a tailwind and ten mikes of rail trail. Danielle dropped Robin off with our heavier gear in Chambersburg and we had lunch at the Old Oak restaurant. Somehow it turned out that my sleeping bag got lost in the shuffle. 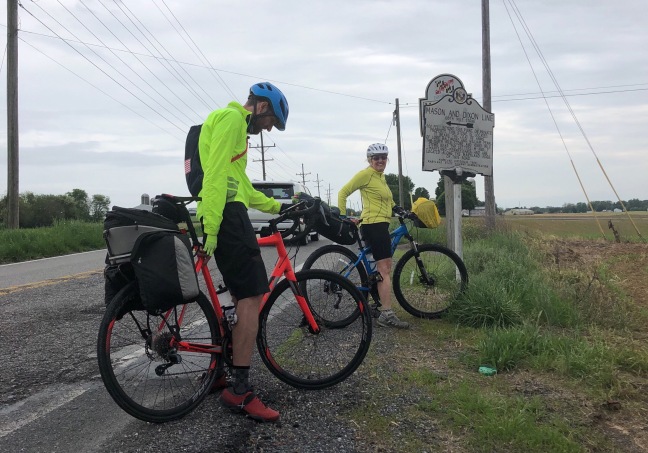 Robin was fresh for the remaining 25 miles to Williamsport, so Justin an I drafted behind her, and we fairly flew down the road and across the Mason Dixon Line into Maryland.
I had just assumed that there would be a grocery store or market in Williamsport, which is a fair sized town that gets a lot of visitors to 5he C&O Trail. But there was nothing to be found except for the Desert Rose Sweet Shop and the Dollar General. And I thought food deserts were an inner city problem, not a rural one! Robin bought cakes and salads at the sweet shop, and I cobbled together a rice and canned chicken dinner from the shelves of the dollar general. 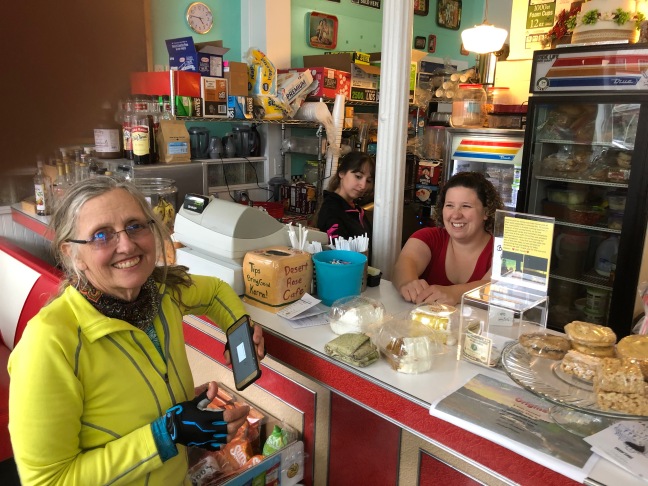 When we got down the hill to the river and 5he towpath, we discovered that the towpath link was closed for construction, and we had to bike back up the hill for the detour. No matter, we still made it to the empty NPS hiker biker campsite by five, plenty of time to make camp, cook, and eat before the rain came

My foot feels much better today – the gel shoe insert seems to be working. Now my butt hurts more than my foot, which is the way it should be!