The wind blew from the east, so I made another 100 miles today. Plus about five miles for detours to towns that were closed anyway and the Runtastic gps mileage tax.

I had a peaceful night, though I woke occasionally to the sound of owls, cattle lowing, and some coyotes howling very close by. A couple of times I thought the dawn twilight had arrived, but it was just the lone light bulb illuminating the desolate public park in the woods. The birds were not fooled, and when the dawn birds began to sing I knew it was really dawn.

My left hand is still weak, but it has been getting a little stronger – I like to think it is because of all the exercises I have come up with. I can work the left gear shift with my fingertips again. Every evening I go through the routine of unwrapping the guitar (it’s wrapped in my sleeping pad) and trying to fret a few chords, then giving up in frustration. I almost put the guitar in a box and sent it home when I passed the FedEx place in Cedar Rapids. But that seemed like an expensive option for a worn guitar. This morning, after a night’s rest, I could fret a C chord, so maybe there is still hope.

But I could not waste this morning’s easterly breeze on guitar playing, so I packed up and headed west. I did not have a clear plan for the day, given that I had no internet access to figure out camping or lodging options. So I just set out to make some westerly miles, assuming I would find a cell connection or WiFi on the way somewhere. My goal is to make a Century whenever the wind blows from the east, to make up for the inevitable westerly headwind days to come.

The locals had warned me that the first part of the ride would be rough. First, I had two miles of rutted dried mud roads to deal with. Then, the “paved” route 65 was being repaved, so it was in the grooved, roughened state the scrape it into. This was supposed to last another 5 miles or so. The mud road was hard enough to be smooth riding, but the ruts could be a problem. At one point, as my front wheel tried to climb out of a rut, it skidded sideways, dumping me on my left side in the gravel, stuck to my toe clip. My left knee, thigh and arm all got muddy scrapes. I picked myself up, and road the remaining 100 yards to the paved road, then cleaned the scrapes with a napkin soaked in my alcohol stove fuel.

I had little idea of where the towns would be or whether they would have services. I just knew that 65 was paved, it went west, and eventually reached Iowa 175, which was even more paved, and I could follow to the Nebraska border eventually. After pedaling twenty miles without my morning coffee, I saw relief ahead – trees and a water tower meant town. There was even a couple jogging on this Sunday morning – surely a town with joggers would have coffee, right? I greeted them, and asked if coffee could be had in town; the answer was “no, not in Randall” but apparently there was coffee in a town 5 miles south. But I wasn’t going south. I asked if there was any coffee if I kept going west. They said no. They wished me luck, and I pedaled west.

There was no privy at the county park I stayed at, and, besides lacking a shovel I didn’t want to dig a cat hole in a community park, so this morning I figured I could relieve myself when I found coffee. As the miles rolled by with no relief in sight, I remembered a bit of doggerel that my elementary school friend David Lynn was fond of – it went something like this: “When days were old, and knights were bold/And toilets were not yet invented/ They dropped their load beside the road / And went off quite contented.” The logic of this school rhyme eventually won out, and I added my nutrient leadings to the fertilizer runoff of central Iowa.

Eventually, D65 ended and teed at Route 17, not 175. I had no idea whether to go north or south, and still no internet connection. So I stopped and pulled out my ipad, since I had at least take some screen shots of the Iowa highway map at the hotel the night before last. It took a while to find the screenshot of the right place, and I went north two miles to find Route 175 west. I also looked at end of the day options, and Black Hawk Lake State Park looked promising, if I could get a site on the Sunday of Memorial Day Weekend. With no cell phone connection, I couldn’t call ahead, though.

Stratford, at mile 40, finally had coffee at the gas stop. I spent a long time in the rest room cleaning up from my mishaps, then headed west with my sipping cup of coffee, thinking that with 40 miles under my belt I could soon start looking for a lunch place with WiFi. Surely a town called Dayton, home of the Dayton Rodeo, would have a lunch place. But they were all closed on this Sunday, and I did not want to succumb to lunch at the Casey’s General Store chain. I detoured a mile to Gowrie, same story. Also in Farnhamville, where a sign invited the traveler to turn right and visits the Lucky Pig pub and grill, quite closed. The American Legion members, in full dress for a memorial ceremony, told me that the only thing that would be open today anywhere was a Casey’s the next one in 8 miles. So I stopped to pick up a picnic lunch at Casey’s General in Lohrville. When I asked the clerk about camping at Black Hawk, he said he didn’t know, but that there was public wifi at Casey’s. So I switched my order to a sit down lunch, and got caught up with the internet. Black Hawk reserves some sites for “walk ups”, so there was some chance, at least. With no phone signal I still could not phone ahead.

As promised by Owen yesterday, today’s ride was mostly quite flat, except where the road dropped into deep river valleys like the Des Moines river. So it was easy riding, mostly. I saw a few large hog CAFOs – some quite unlucky pigs. You really can hear their squeals of anguish all the way from the road. 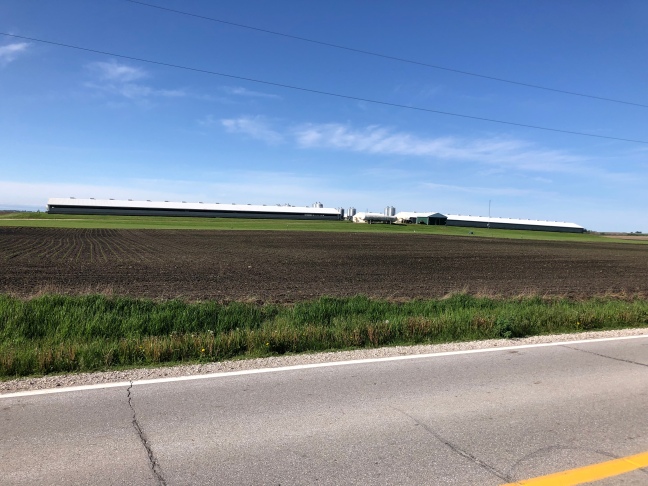 At mile 95, I went shopping at the last chance before the state park – the “Sparky’s Market” at the Sinclair station in Auburn. The healthiest dinner I could put together was Kraft mac and cheese plus a can of green peas. But at least they had 24 oz Bid singles.

The traveler at the mart was really dubious about me finding a campsite at the State Park – he was coming from there and it looked really full. But when I got there, there were plenty of empty sites to choose from – not lakefront, perhaps, but perfectly adequate. And four bars of AT&T service, which I have not seen before in Iowa. A hot shower and a change of clothes is a nice treat for the end of a good day. 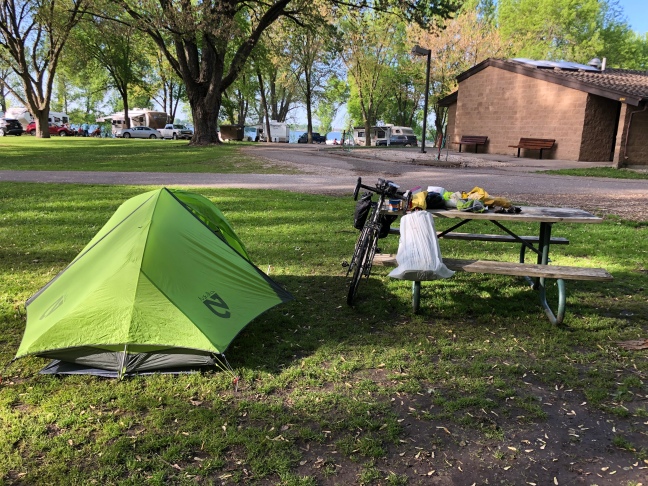 Thunderstorms forecast overnight and tomorrow morning, and headwinds, so I may get a late start. 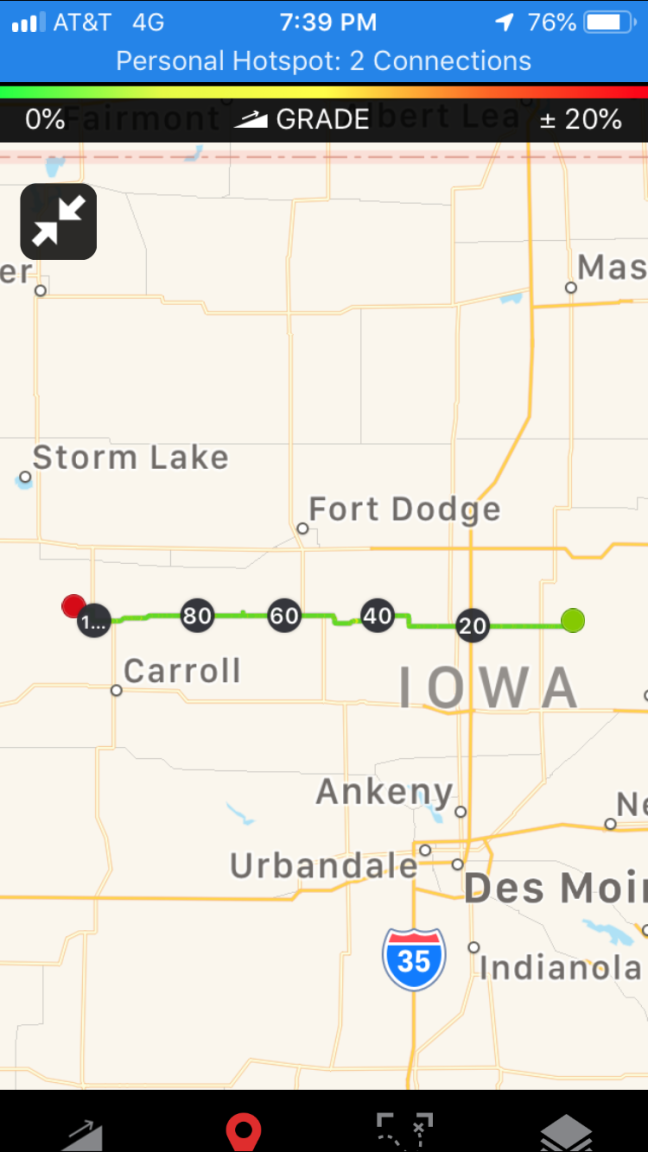