5/30
I made 83 miles today, from Bassett to the range somewhere west of Crookston.  I will have to add pictures to this post later, since I have no bandwidth out here in the wild. 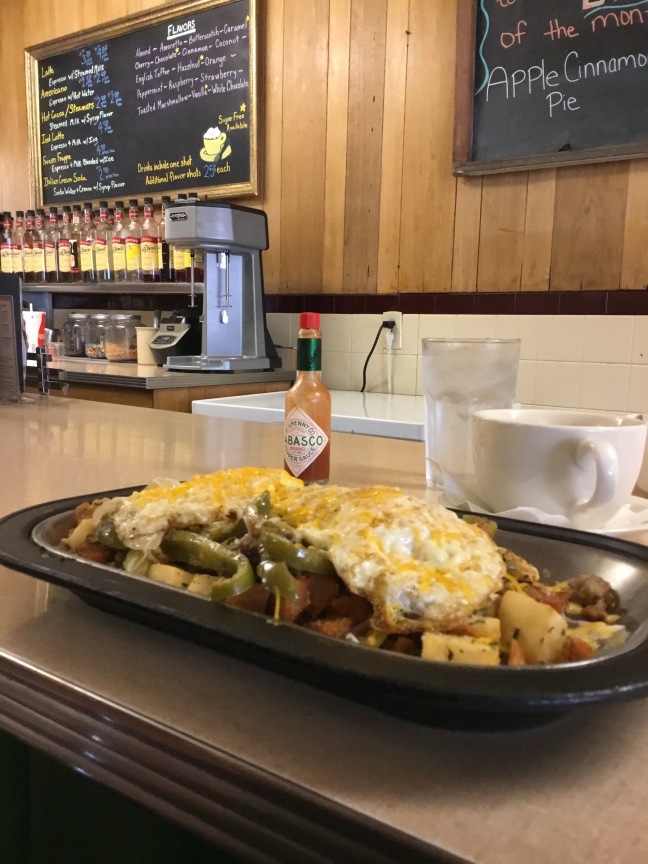 I slept late this morning – my body must have needed some extra rest after two arduous days. I took advantage of the fast WiFi to download the copy edits of my book to review at some point and catch up on emails. After a leisurely breakfast of eggs over sausage and potatoes, I took some time to soak my finger and make some bike adjustments. I did not actually hit the road until ten am.
As of this morning, I am about 40 miles ahead of my goal for this point in the trip. Those miles are like money in the bank – I want to save them for when I really need them. So with a light headwind forecast, I would ordinarily want to make my average eighty miles today, and save those “ahead” miles for the big climbs and high altitudes in the Wind River Range next week. But there were no good overnight options: there was camping and hotels at the end of the “improved” Cowboy Trail in Valentine, but that was only seventy miles away. The next camping was in. Cody, 105 miles away. My body was not ready for another century, so I figured on a leisurely tour on the soft and slow Cowboy Trail, and its most spectacular section between Long Pine and Valentine.
Although the wind was supposed to be against me, it was light, bright, and sunny all day. The trail out of Bassett seemed like good riding at first, it soon got soft, so I switched to the adjacent paved Rt 20 until it climbed over the trail at an overpass. The trail through the open range looked intriguing so I backtracked to get back on the trail, it it was still soft riding and soon reached a closed section.
I rejoined the trail in Long Pine, and soon reached the first of the day’s two spectacular trestles over the Niobrara River. 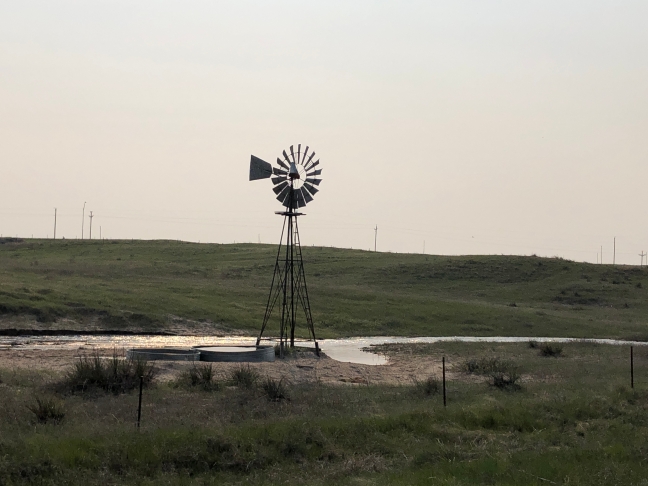 Just before Ainsworth, I saw the white tail of a surprised deer bouncing away from me across the grasslands. Only it was springing up like no deer I had ever seen. I realized then that I just saw my first antelope of the trip!
In Ainsworth I looked for a barber shop, but it was closed for lunch. North of town m the trail seemed overgrown, so I pedaled Rt 20 again until Johnstown, where the trail was good riding and went cross range away from the road again. I started to look for a picnic spot, but there was no shade or dry ground to sit on. Eventually, after the trail rejoined Rt 20, I found a nice looking tree, it when I got up close I realized it was surrounded by poison ivy. A little farther down the trail, o hit a soft patch of sand on the edge of the trail and went down on my left side, ripping the scabs off my Iowa gravel road rash. It was not until Woods Lake that I found a place to sit and eat and clean up. I was hoping Woods Lake might have a store with ice cream for dessert, it there as noth8ng to the storefronts in the tiny town but a post office.
I was making good time, so I began to consider pushing on beyond Valentine and camping rough on the unimproved part of the Cowboy trail where it parallels Route 20. 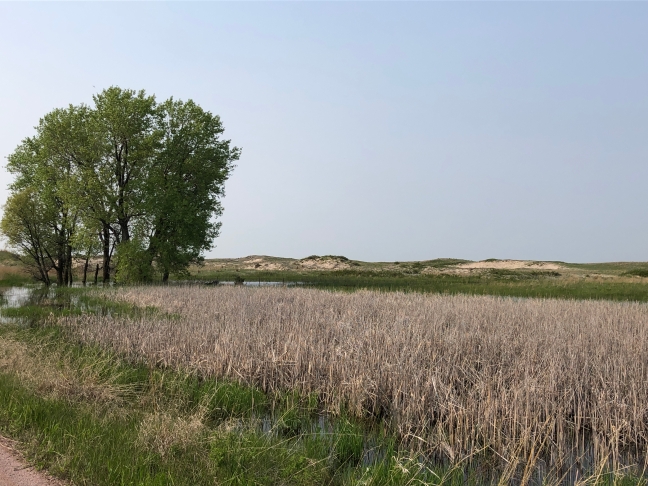 Beyond Woods Lake, the Cowboy Trail eventually departs from Rt 20 and carves through the Nebraska sand hill rangelands. The little hills looked like sand dunes and I half expected to turn a corner and see the ocean. 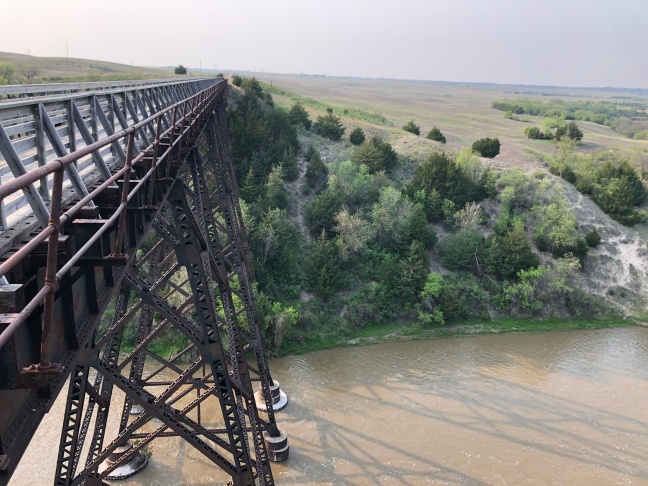 The Cowboy Trail reaches its climax just south of Valentine, where a long trestle crosses the deep gorge of the Niobrara River. It was spectacular in the late afternoon light!
In Valentine I stopped at the Subway for my usual charge-ups, but all of their outlets were on the ceiling, and they had no public WiFi. The staff seemed less helpful than at the other Subways on this trip.
I confirmed that sunset was not until after nine, bought some yogurt and bananas at a nearby supermarket, and headed west into the sunset on the unimproved cowboy trail. Which is just route 20. Although the state maps show a dotted line where the cowboy trail extends another 150 miles west to Chadron, and Google will tell you to ride a bike on it, and I confirmed on Google satellite view that there was at least a trace of a right of way set apart from the road. It looked like I could camp on the old right of way, maybe hidden from the road by the occasional tree or brush. What I found in the dwindling twilight west of Crookston was cattle fencing running up to the highway right of way, and no way to get to the invisible right of way without trespassing on cattle land.  ultimately settled next to the cattle fence in a slight depression hidden from westbound traffic behind a dune. I set up my tent with a strong SEP field, checked with my flashlight that there were no reflective strips on the tent to attract attention from the occasional traffic on the road fifty feet away, and listened carefully for any sign the passing cars and trucks saw something to slow down for. I will look harder for other camping options for tomorrow night. 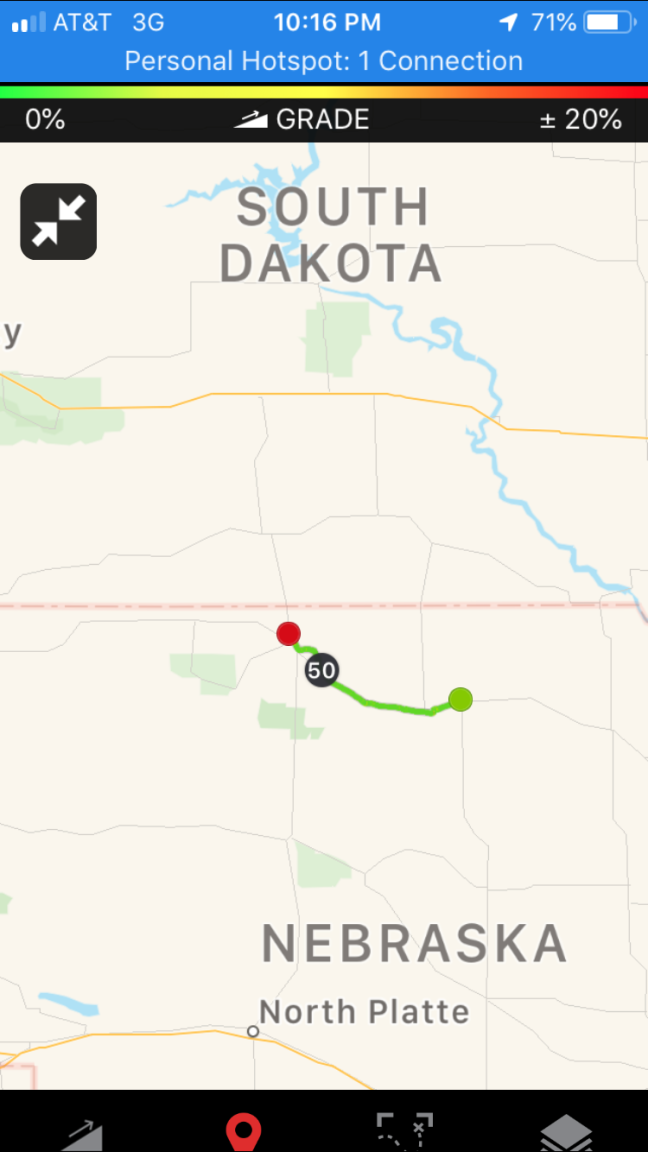