I made 83 miles today, from Christmas Valley to the Scott Creek Campground 25 miles south of Chemult, Oregon in the Winema National Forest.

One challenge today was a Waterkeeper Board meeting scheduled for 9 am to noon Pacific Time. I couldn’t afford to delay a desert start to an eighty mile day until after noon, so I needed to make some miles before the call. Fortunately, there was a small town called Sliver Lake, with a cafe, and (according to AT&T) cell coverage. So I actually set an alarm for five am, woke up at 4:45 without the alarm, had motel Mr Coffee, two bananas, two cherry pastries, and an orange juice as a down payment on breakfast and actually hit the road before six am.

My new firmly inflated tires rolled easily down paved Old Lake Road in the long clear light of the desert dawn. And the desert is cold in the morning! But the scenery was interesting, and the sage desert faded to green irrigated fields. By the time I reached Route 31 the hills were not just dotted, but blanketed with pine trees.

I reached Silver Lake in plenty of time, so I went shopping for dinner at the Silver Lake Market, since I did not expect to see another store. The cavernous market had the air – and a little of the odor – of a building that devoted most of its life to the repair and maintenance of internal combustion engines. Pickings were slim. I settled on Vienna sausages and sauerkraut (that’s a vegetable, right?) for dinner, with the one Chobani yogurt in the fridge case as dessert.

I went back to the Cafe, and made a test call to Robin to see if one bar of cell was enough. For second breakfast I ordered the “classic” – eggs over hash browns, with sausage and toast and endless coffee. I kept getting dropped from the phone call, but fortunately the cafe had WiFi and I could use it to connect to the meeting.

After the call headed west out of town and turned left on Bear Flat Road, which led into the Fremont National Forest. And there were trees! At first, short pines dense enough to provide a windbreak, but not tall enough to cast a shadow. At last, I was through with battling headwinds in treeless plains! And as the road ascended, the trees ascended as well, becoming towering red barked

pines shading the road – shade that was hardly needed in the still cool air. And the scent of pines and the whisper of the wind in their needles told me I had finally left the desert for the Forest. (Oregonians seem to think that the high desert can be full of trees, that’s fine, I’ll take my desert with trees thank you). Glimpses of the snow clad cone of Mount Scott showed up on straight stretches of road. To be sure, stretches of forest showed evidence of logging activity, and a few logging trucks passed me in the opposite direction, but I was grateful for the forest anyway.

When it got to be lunchtime (a little later than usual, given second breakfast), I really wanted a stop with a view of Mount Scott. I was almost ready to give up when the road passed the Klamath Marsh National Wildlife Refuge Headquarters and descended to a huge open wet meadow with a dramatic view of the peak. So I stopped for lunch, then went back to take a picture of the crossing of the Williamson River. 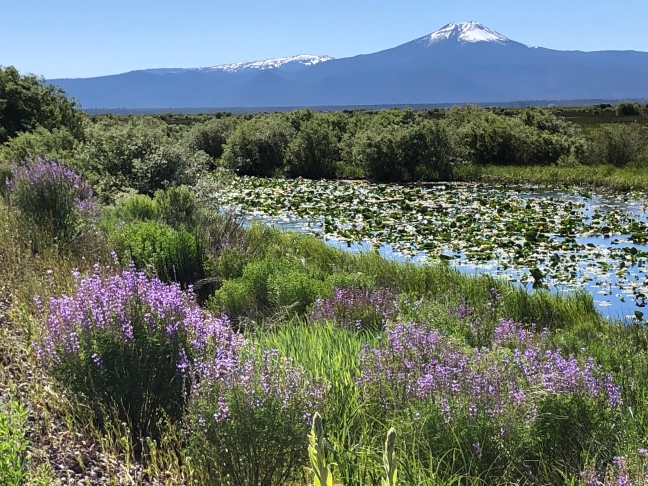 After lunch, the road through the wildlife refuge rose to a ridge then dropped even more spectacularly into Klamath Marsh itself – ten miles of causeway across marshlands with Mount Scott towering over it all and other snow clad peaks in the wings. 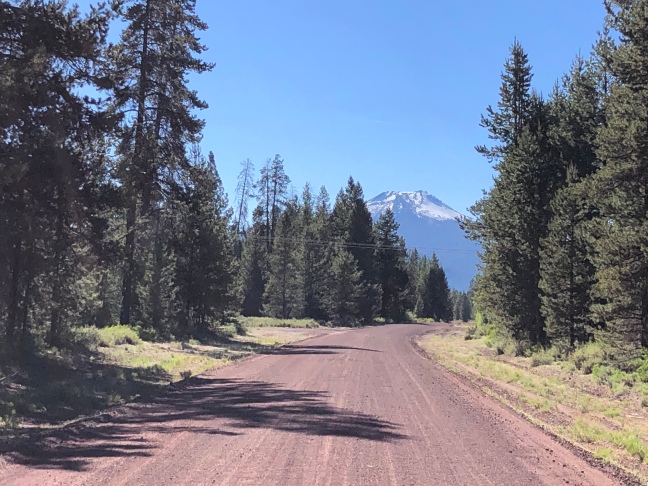 At mile 78 for the day, I reached Rte 97, and crossed it to the Forest Service Road that would provide access to the campground. It was tough going in the soft, fine, red gravel. My new tires are a little skinnier than to old ones – 35mm instead of 38, and they sliced and sank right into the gravel. I could barely make the bike move and stay upright – and it was five miles to the campground. So after going to all that trouble for firm tires that didn’t leak . . . I let some air out of both tires, the flatter treads floated and gripped a little better in the gravel, and I could find a good line to ride at an acceptable clip. The route went from gravel to hard dirt deep in the woods – an easier ride – and eventually dropped into the shallow ravine where Scott Creek flowed and the empty campground awaited me. 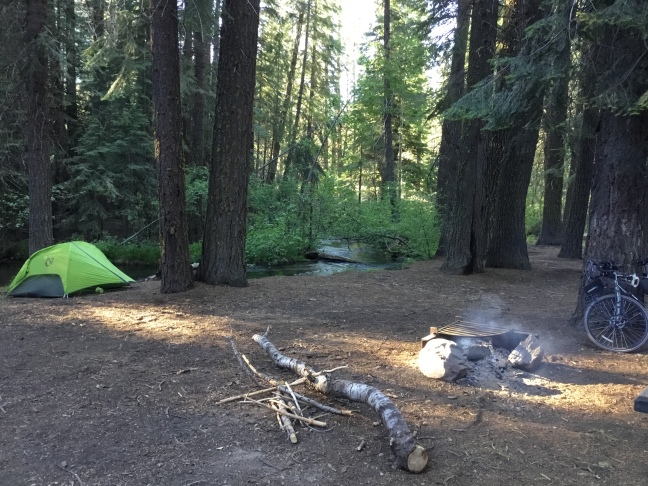 And here I have peace and solitude – deep in the tall trees lit by the slanting rays of the evening sun, the only sound the gurgle and hiss of the clear flowing creek. There was plenty of firewood and kindling, so I started a fire to cook, purify water, and maybe keep the bugs and bears away. My solitude was disturbed only briefly when a pickup truck with a couple of men riding on the tailgate stopped to fill several large containers with water from the creek crossing. Later, a small crossover SUV drove in and out of the campground several times before settling at the far end of the campground, but they were very quiet and I might as well have been alone in the wildernelss