I pedaled 41 miles today, but most of it was playing tourist at Crater Lake National Park. Still, I am sixteen road miles closer to the Pacific at the end of the day, so this counts as one more leg of my journey. 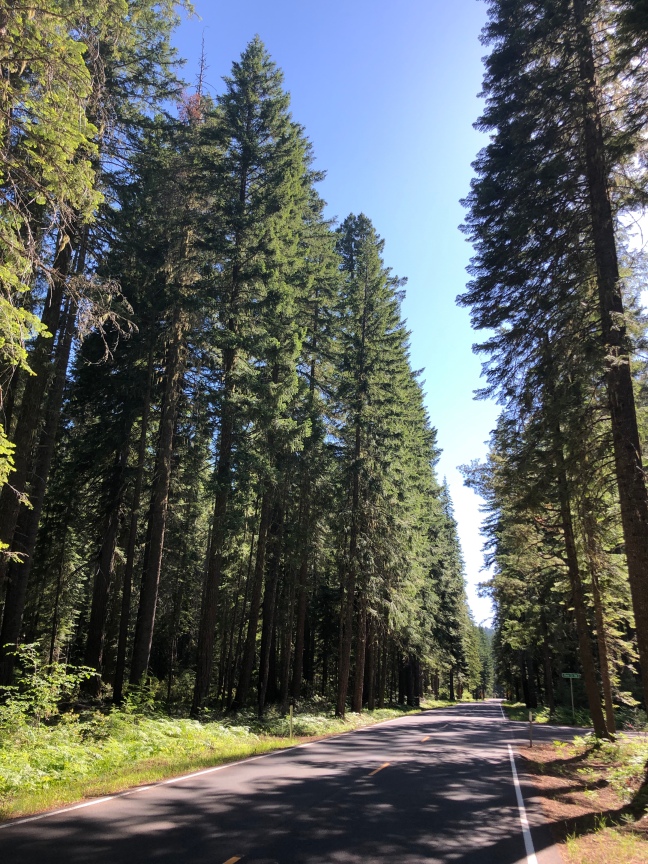 The first night of summer was the coldest night of the trip – there was a heavy frost on the bear cache and picnic table by my tent this morning. I am traveling with a very light and compact fleece sleeping bag that is only good to fifty degrees. On cold nights like last night, I wear all my warm clothes and throw a space blanket over the top of the bag, and I slept comfortably enough. I woke up early out of habit, but took my time breaking camp. A Stellars Jay tried to fly off with my oatmeal package while a chatted about my trip with one of the other campers. Mazama Village is an enormous campground, but as far as I could tell I was the only person in an actual tent

My goal for the day was mostly to play national park tourist. I left my gear with the campground registration desk – no reason to drag it 2000 feet higher to the rim. The road climbed gracefully through the tall trees. I stopped often, including at the visitors center. Finally, after a series of hairpin curves with snow on the edge, the road crested the rim and I was absolutely awestruck by Crater Lake. I spent some time right away walking along the path and taking pictures. They were out of coffee at the cafeteria, so I had a hot cocoa and confirmed that the WiFi was no better up there than down at Mazama. 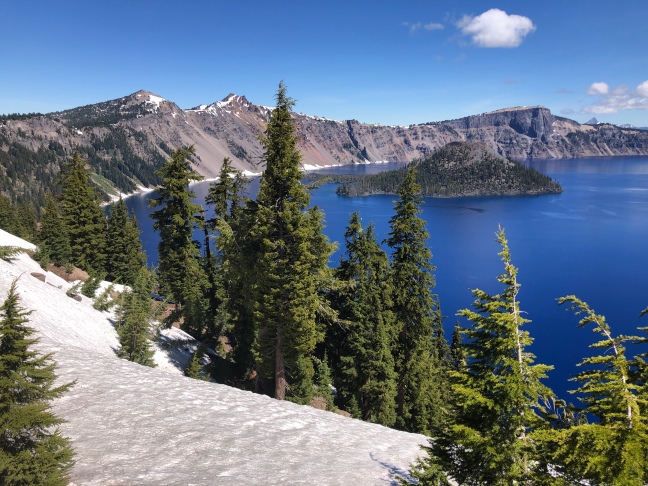 The East Rim road is still closed for snow. After my cocoa break, I rode along the west rim road as far as the Watchman lookout, about five miles along. I was hoping to climb the Watchman, which is listed as a “moderate” 1.6 mile hike, but the trail from the lookout was closed due to snow. Perhaps the other end of the trail, facing south, would be open, so after taking in the view, I headed back downhill a mile. There was no closure sign at the parking lot, so I walked along the trail about half a mile before coming to the trail closure sign. I considered pushing on, but reminded myself that this is a bike expedition, not a snow mountaineering expedition, for which I was ill equipped. I sat down on a crag and soaked up the deep blueness of Crater Lake, then enjoyed my solitary walk through the tall dark trees that framed the bright lake and snowy cliffs. On the way back I found an even more spectacularly crag to sit on and take in the whole sweep of the caldera.

I went back to Rim Village for lunch at Crater Lake Lodge. It was a long wait for lunch, but my lunch came very quickly once I was seated. I later learned that I was mistakenly given the neighboring table’s identical order – salmon over linguini, and clam chowder. Lunch is a great way to experience this great wilderness lodge on the cheap. There are no signs telling you there is a restaurant open to the public – you have to ask.

After lunch I put all my warm clothes back on for the descent to Mazama Village. It all went by in a spectacular blur as I took the hairpin curves as fast as I dared on my nice new tires. At Mazama I shopped for a bare bones dinner – spaghetti and bottled sauce, picked up my gear and a beer at the restaurant to drink later, then headed down Rt 62.

Or rather up, since I had just a little more climbing to reach the watershed divide between the Klamath and the Rogue. Another landmark at the height of land – the Pacific Crest Trail – so I have ridden from the AT to the PCT now.

After that, the road descended in a twelve mile winding delight of tall trees and dark woods. I reached the Farewell Bend campground on the Rogue River at five, and it is a good thing I reserved a site, as they were full up. I set my tent up on the bank of the Rogue, another goal achiieved