I made the last 30 miles to the Pacific Ocean and Crescent City, California today. End of story.

Friday evening beers at the Patrick Creek Lodge yesterday felt like a homecoming to a place I had never been – it felt like happy hour at Garnet Hill Lodge. The patrons were local fishing guides and they all knew each other’s story. I was welcomed. The lodge even has the feel of GHL; it was built in the 1920s and has a similar added dining terrace. But the crowd was sparse, and the owner looked nervously at all the elegantly set but empty dining tables on a summer Friday evening.

This morning, I took my time breaking camp for the last time and hit the Redwood Highway traffic at around eight. It was a pretty run through the Smith River canyon, making frequent picture stops and pulling over to let traffic by on the narrow stretches. I don’t want any motorist to have to choose between a head on with a truck coming round a bend and a soft target like a cyclist. 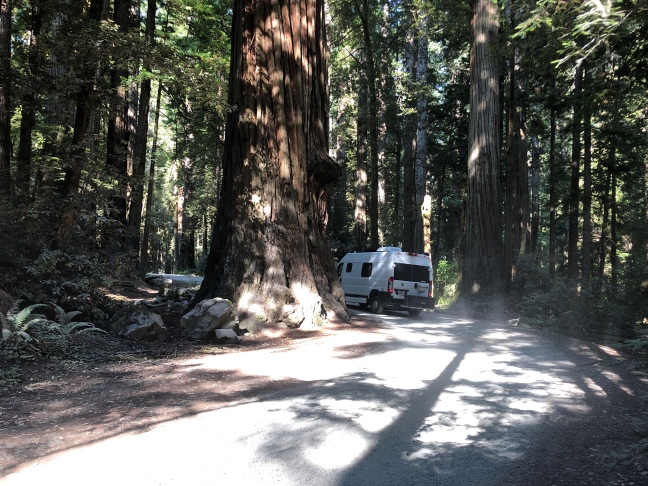 Fifteen miles down the road, I left the Redwood Highway for the actual redwood trees on the Howland Hill Road through the Jedediah Smith Redwoods State Park. Unpacked, but hard packed and easy rolling, I was soon lost in the winding way through redwood trunks. For the trunks are all you can take in at once. Or the tops, but that makes you dizzy on a bike.

I stopped at Stout Grove for a slow stroll around the redwood path, among other travelers equally awestruck and silently reverential. The peaceful timelessness of that place will stick with me for a long time.

Back on Howland Hill Road, I went as slow as I could, coasting the flat stretches, braking down the hills, slow pedaling the rises. Unlike the cornfields of the Midwest, the mountain passes of the Rockies, and the sage deserts of the Great Basin, I did not really want to reach the other end of this forest.

But after one last rise, Howland Hill Road burst out of the redwoods onto pavement, and down the tight curves of the steep descent I caught my first glimpses of the blue rim of the Pacific Ocean. I stopped to take a picture, then as it sunk in that I had ridden ocean to ocean across a continent I laughed out loud and whooped, though there was no one to hear my solitary exultations. 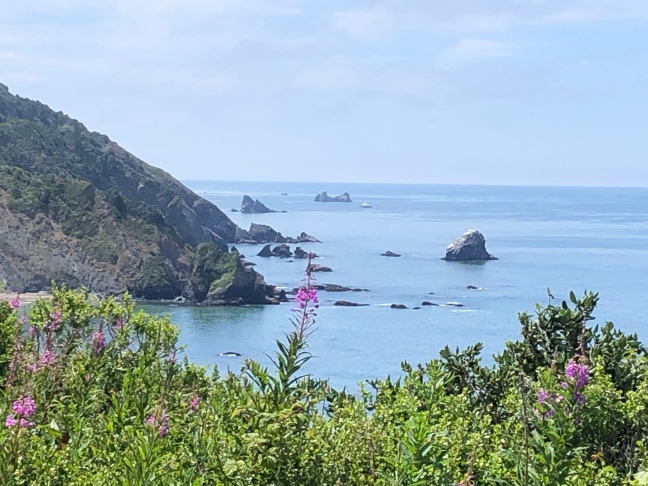 At the bottom of the hill, a herd of elk grazed lazily near the intersection of Highway 101. I took my time getting to the beach, riding first to the Crescent Beach Overlook, before riding down to Crescent Beach itself, stripping off my bike shoes, and dipping my tires in the wash of the Pacific Ocean, where I sat contemplating the western horizon for an hour before the afternoon fog rolled in.

10 thoughts on “49th Leg – Slow Walking the Redwood Run to the Pacific, and the Journey Ends”