6/1
On a mostly sunny day with light, favorable winds, I made almost a century- 97 miles – to Harrison, the last town in Nebraska before the Wyoming border.
My night in the Gordon City Park was mostly quiet, though at 2 am some loud teenagers woke me up. It was, after all, Friday night in a dark corner of the city park. But after a half an hour their voices faded as they walked away, heedless of my presence.
Yesterday’s dawn bird chorus at 5 am CDT was today’s dawn chorus at 4 am MDT. I slept in a little before rousing myself and breaking camp, hitting Rt 20 again at around 6 am.

With a light easterly wind, i aimed to get s far west as I could, near or even across the Wyoming border. Early on, it all seemed possible, as the smooth a pavement and tailwind made for effortless 12 mph riding. Without bumps in the road, my but sores hurt less, and without pushing hard, my feet hurt less. But no good pavement lasts forever, and by the end of the day I was again an expert on trying to pick the best line through butt jarring lateral expansion cracks, seeking smoother pavement in the travel lane (when I could and when it was actually smoother), bumping across the rumble strips, and suffering the torture of another seven mile stretch of “milled pavement” riding into Crawford. 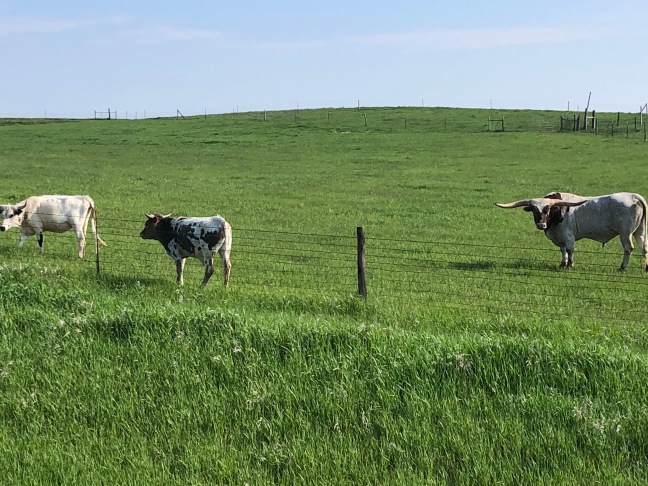 Today I saw the most dramatic change in scenery of the trip. The day started on a flat range that seemed to go on forever. But shortly west of Hay Springs, the road dipped into a valley that was surrounded by ridges covered with pines. West of a Chadron, the horizon had actual blue hills of some sort, and the first butte appeared to the south. By Crawford, there were dramatic butte spires on both sides. 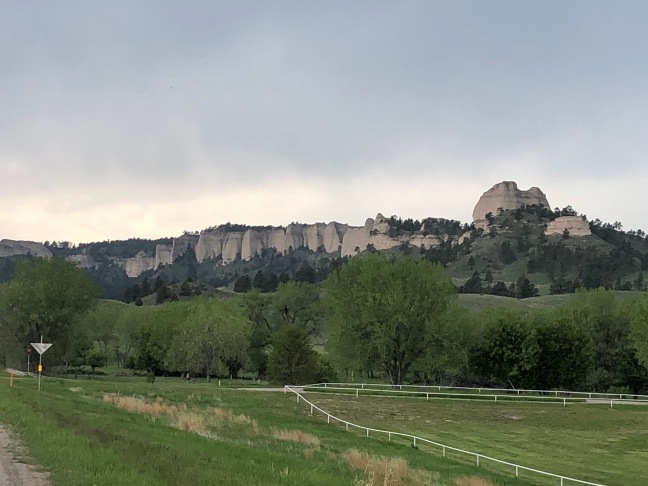 I had lunch in Crawford (72 miles) at Stanned’s Drive In, then spent some time researching my camping options for tonight and next week. Lusk, Wyoming, was way too far for tonight, but Harrison, NE had both City Park and RV site camping. I started plotting my strategy to get over Wind River Pass next week and discovered that although the distances were doable, camping options in the right places were not. I spent some time on the phone with the Latrona County Sheriffs office to figure out where roadside camping would be permissible.

By the I was done with lunch, it was two pm. I went to the Dollar General across the street to get something for dinner, since I knew it would be the last store before Lusk, fifty miles on. Thunderheads were forming as I left Crawford, so I ducked into the Fort Robinson historical site for shelter, though it turned out to be nothing but a sprinkle.
West of Fort Robinson, the road began to climb and climb and climb through another pine sided valley. A sign reading “Scenic View, 2 Miles” told me I had a long way to climb. When I finally reached the summit, I checked the altimeter on my cycling app – about 4600 feet. The last few days I have been steadily gaining elevation. Now I had reached the level of the summits of the high peaks of the Adirondacks! This is a good thing, since I have to start acclimating for Wind River Pass next week, at 9500 feet.

The top of the climb turned out to be a rolling plateau rather than a peak, and a climbed and coasted the hills on the rain slickened road into Harrison, where there was a sign with a tent and a trailer on it directing the camping traveler to a city park with unlocked restrooms with working outlets, covered picnic tables, and a tree grassy space for tents. I call that glamping!