6/2I rode my bike 86 miles today into freakin Wyoming. I rode a bike to WYOMING! Need I say more? Somehow, that is more impressive than the Mississippi River or Nebraska, as charming as the cornhusker state may be. 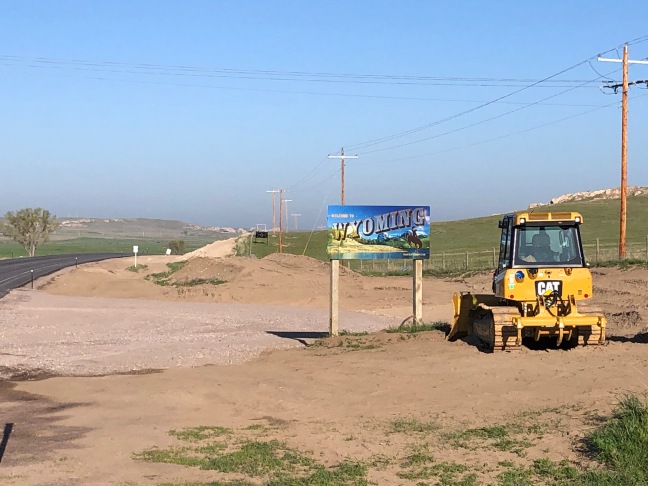 It was a 30 mile ride to coffee in Lusk, Wyoming. There were some really interesting looking coffee shops, all closed for Sunday. So I got coffee and a roll of mini chocolate donuts, and took my shoe off to rest my left pinky toe. 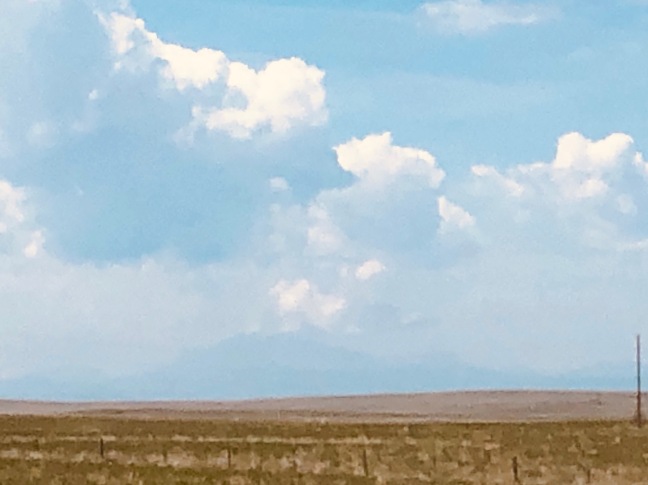 Winds were light, but favorable, with Douglas at about 83 miles as the most likely destination. Newsflash: Wyoming is pretty flat, except for the pointy parts. I was really looking forward to seeing mountains again. Sailors know that you will see clouds that mark an island at sea scores of miles before you see the land itself, and sure enough, by Lusk, cumulus clouds in an otherwise clear sky marked the distant mountains. West of Lusk the hazy blue line of a high mountain rose from the plains.
Wyoming roads seems smoother than Nebraska roads, and the miles rolled by. I stopped at a shaded picnic bench at about 50 miles for lunch and a butt and toe rest. My legs and knees are holding up fine, but my butt is painfully sore after 30 miles or so, and the stabbing pain of the soft corn in my left pink toe is the only malady that makes me want to just stop. I saw a podiatrist years ago, she gave me a lifetime supply of foam toe separators that work well enough for ordinarily life, but are not up to ten hours a day of athletic activity. I generally avoid pain medications (hey, pain is just your body’s way of saying take it easy), but I would welcome a daily shot of Novocaine to numb my toe, which is trying to tell me “Stop Wearing Shoes!.” I googled topical analgesics last night, but nothing OTC looked like it would help much. But I have some ibuprofen with me, which I had resisted so far. But when I read that Vitamin I also helps protect against altitude sickness, I popped one tablet with lunch.
And the afternoon ride was much easier. They should ban the stuff as a performance enhancing drug. The pain was still there, but it just wasn’t painful any more. Even my butt pain was tolerable, and my finger numbness went away.
In fact, I was rolling down the smooth Wyoming version of route 20, waving at the eastbound touring cyclists that were more plentiful here, and calculating whether I could stretch the day to Glenrock, when I realized I had flown past the Antelope Road shortcut to Douglas. I wasn’t going to pedal back uphill five miles, so I just rolled on down to Interstate 25.
Bicycles are allowed on the interstates in Wyoming, because many places that’s the only road. And as long as I was rolling on the interstate with the sun shining on my solar panel (despite the thunderheads over the mountains) I decided to play my cross country road trip playlist on my iPhone. Here it is, arranged roughly from east coast to west. 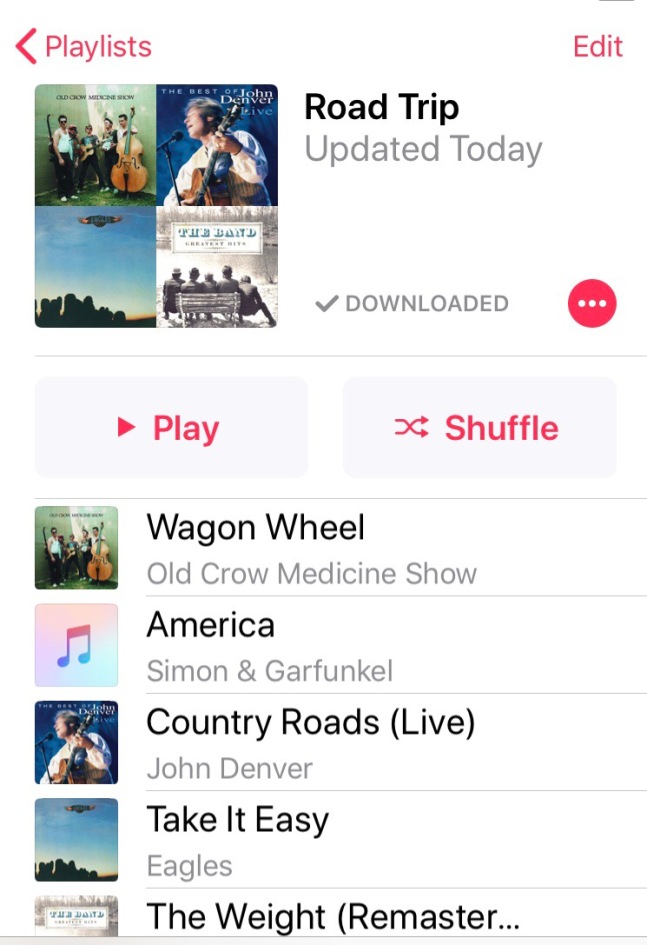 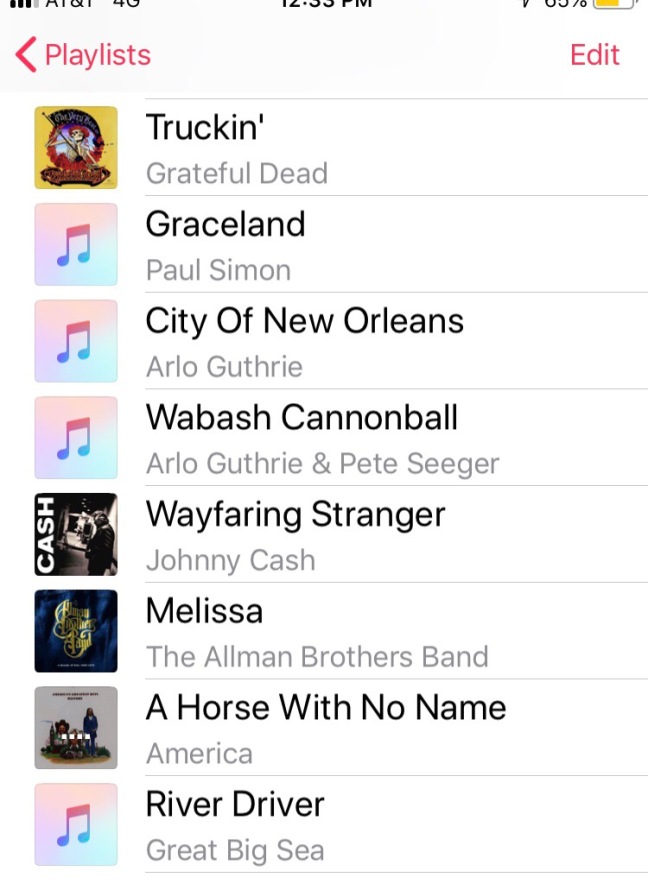 I could use some more western mountain road tunes. And River Driver isn’t really a western song, but it should be the anthem of the Riverkeeper/River Pirates ROGUE river trip that is the penultimate destination. Its refrain is also good advice for a long distance cyclist:
I’ll eat when I am hungry and I’ll drink when I am dry,

Get drunk whenever I’m ready,

Get sober by and by,

And if this river don’t drown me,

It’s down I mean to roam,

For I’m a river driver and I’m far away from home.
I pay close attention to what my body is telling me- when I feel the least bit hungry I eat trail mix from my handlebar cup. When I feel dry, I drink water right away. I haven’t been ready to get drunk yet (saving that for the Rogue), but a 24 oz single sure soothes the muscles.
So I found myself freewheeling down the freeway on the long grade into Douglas, to the sound of the Dead’s “Truckin.” 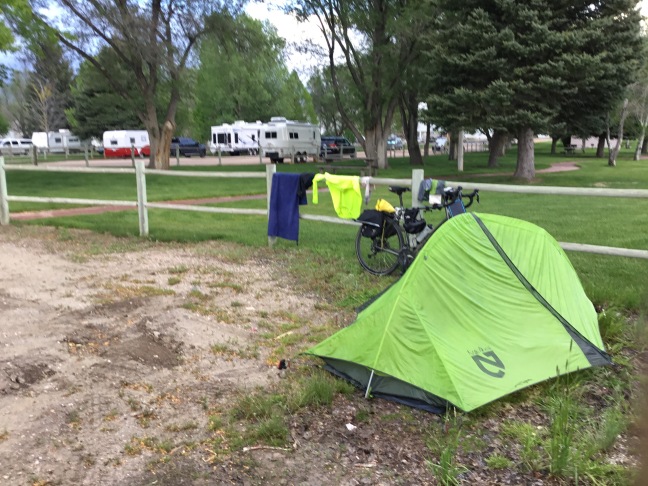 Douglas has free camping by the North Platte River. With showers! A sign said “No Camping on the Lawn” with the explanation that sprinklers would come on at night, so I set up my tent by the gravel road to the river. Mike and Patience, and their two dogs, were sitting out the rain showers under the bridge. They didn’t know that camping was allowed at the park. They have been hitchhiking around with no particular destination. It was tough to get a ride out of Casper because there are so many homeless people. Mike said he knows how to ride the freight trains – you get in the unmanned pusher locomotive at the end of the train, and you can sit in the seats and put your beer in the fridge. One of the dogs has ridden with them

4 thoughts on “Leg 28 – Freewheeling Down the Freeway Into Douglas, Wyoming”